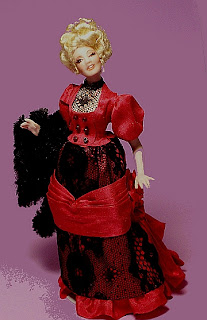 My name is Viola Williams and my first step into the miniature world was making a dollhouse for my children. i must confess that as soon as the children left for school, I rushed upstairs into their room to play with the furniture and their little house.

At that time I didn't know about miniature magazines, workshops, or mini shows so everything was made from whatever items I could find around the house or at hardware stores (there's always a lot of stuff that can be "seen" as a miniature at those shops. I also found new ways to use common craft items. For example, I removed the back from a large "wobbly eye" so I could have a curved "glass" front for my Victorian picture frame. The frame itself was a flat round black button. Inside was a miniaturized photo of our family.

I put many of my "make it from odds and ends" ideas into booklet form that I named "I Made it Myself".. That booklet is now available from Shelly Norris (shelly.norris@gmail.com).

Back to my little dollhouse that had no residents. I thought it was time for me to have some little people that were willing to become naughty or nice... depending on my mood. The eventual result was some ladies of the night, along with demure Victorian people and children. I began making dolls from polymer clay. I knew nothing about scale but managed to get them pretty close. It wasn't long before I wanted my dolls to be made of porcelain but I had no idea how to do so. I did not yet know of any doll makers in dollhouse scale, so I visited the big-doll ceramic shops to ask questions. Not surprisingly, they weren't eager to offer advice since they were in the business to give classes, NOT free advice.

I really didn't want to make a big doll. Nor could I afford the high cost that big dolls can demand and that price must be included in the cost of a workshop. I walked out of the store but not without having gleaned at least a little information. I found out what China paint looked like and learned that it had to be mixed with a medium. And... I was thrilled to know that the shop would fire my pieces for me for a price.But there was more to learn. My biggest problem being not knowing how to make a mold. Eventually I learned more about the whole process, often through trial and error. I soon discovered that porcelain shrinks after being fired. (whoops!...) but I charged on. Thankfully by now I had my own kiln. So mistakes could be made right in my own garage. 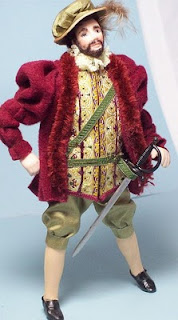 Shortly after making my first doll I found a miniature magazine and in it I saw one of Doreen Sinnet's dolls. If I'd have seen it earlier I probably would never have sculpted my own because hers was so beautiful.. I would have bought it instead... but by now I'd invested too much money and time to change direction.

Somewhere between my first dollhouse and now, I found myself devoting ALL my time to the dolls. I no longer made houses, furniture or any other small item. I fell in love with the dolls and when I learned about, and attended, my first doll show several years earlier, and found that I was able to sell my work earning enough to buy the kiln, I glued myself to my chair and spent many hours hunched over my work table creating little people.

That was 30+ years ago and not much has changed. I did start a miniature magazine named "Dolls in Miniatures" (later changed to "Dolls and Miniatures". with a partner It focused mainly on dollhouse dolls with some mini teddy bear information and patterns as well. That magazine was sold and then discontinued. I have several unused copies that I sometimes offer for sale on MOA.

You do know about MOA, don't you? It's an auction site directed exclusively to miniature items. Things are slow there now as they are also slow on eBay. But I often use it any way because it's free to list. So I consider my unsold auctions to be free advertising to its approximately 1300 members, all of whom are miniature lovers.

My next move? It will probably be retirement. So many of the supplies I've bought are getting old and it is so very expensive to begin this hobby. And that's where I'll soon be: at the beginning again…

Thank you for hearing my story. I can be reached at: Dollsmini@aol.com.
My website is www.violasdolls.com
My Space site is http://www.myspace.com/viola_williams_dolls
and my mailing address is Viola Williams, 9412 Hingham Dr., Huntington Beach, CA 92646, USA
Posted by Artisans in Miniature at 22:00
Email ThisBlogThis!Share to TwitterShare to FacebookShare to Pinterest
Labels: AIM Member Showcase, Dolls