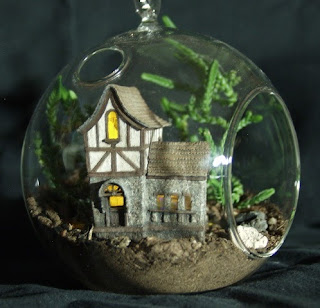 I have been a professional miniaturist for the last 12 years, creating a wide variety of miniature dwellings, furniture, accessories, and animals.  I began my career with animal figures, and was awarded IGMA Fellow membership in 2001 in that category.  Although I still make some animal figures, my creative pathways have greatly diversified.  At the dawn of the new millennium I found what I believe is the perfect craft medium, Creative Paperclay®.  The majority of my miniature creations are now made with paperclay, though I also do metal work and wood carving.  My husband, Steve Weller, and I have created a number of animatronic pieces in miniature, using his skill as an electronics designer.  We have also produced a how-to DVD on using LEDs for miniature lighting. 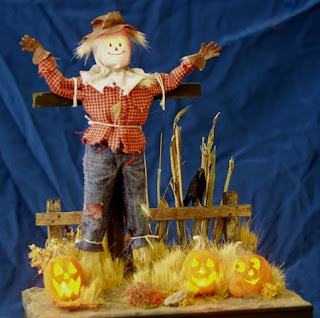 I have been involved in teaching and doing an occasional show, although the majority of my work is handled through our web site. Some of my teaching experience includes seminars and full length classes at the Guild School in Castine, Maine, and a variety of workshops at the NAME National. In addition, I’ve given many classes to smaller groups and clubs throughout the southwest, and written magazine articles for some of the major industry publications.

In 2010 I am moving in yet another direction. Since I discovered, a few years ago, that I have a major fairy community living in my yard, I’ve been concentrating on creating fairy dwellings and household items for their use. I am also developing artwork depicting the fairies, photographing them, and learning about their lives and habits.
Website -http://www.minimotion.com
Facebook page- http://www.facebook.com/minimotion
Posted by Artisans in Miniature at 10:00
Email ThisBlogThis!Share to TwitterShare to FacebookShare to Pinterest
Labels: AIM Member Showcase, Animals and Birds, Fantasy myth and magic miniatures, smaller scales, Xmas 2010