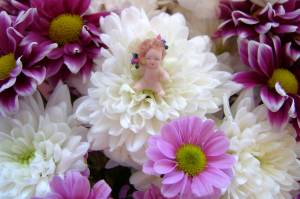 If you would like the chance to win one of Louise's miniature hand-crafted Baby Fairies please visit the latest posting on her Blog at...


http://angeliqueminiatures.wordpress.com/whats-new/
Please note that the competition is only open until May 1st 2011.
Posted by Artisans in Miniature at 15:34 No comments:
Email ThisBlogThis!Share to TwitterShare to FacebookShare to Pinterest
Labels: Dolls, Fantasy myth and magic miniatures, Xmas 2010

The Bells are Ringing for Him and His Girl... 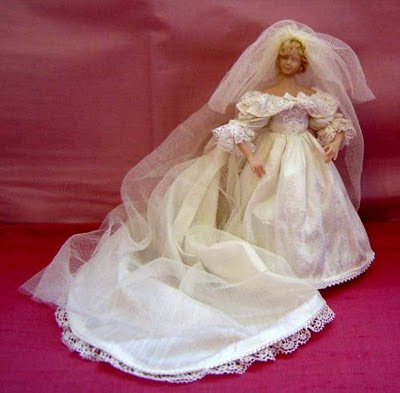 A Note from the Editor - The AIM Magazine April 2011


In 1981, when a certain prince’s mother walked down the aisle of St. Paul’s Cathedral, despite being only nine, I sat for the duration of that historic royal wedding with my nose twelve inches from the television screen, utterly mesmerised. So you can imagine my excitement when the news was announced that there was to be another royal wedding and it seems I was not alone!
In the weeks leading up to this April issue, AIM members have also been captivated by the sense of anticipation and excitement that has been generated by the imminent Royal Wedding of Prince William and Catherine Middleton, due to be held later this month.

However, as with any professional media publication the themes which the AIM magazine’s issues are built around, are voted upon and intricately planned months in advance, but, from time to time the real world interrupts the harmonious ebb and flow of the world of miniatures and when it does it is fun to respond. Therefore, as we are a ‘real’ time publication, the AIM editorial team decided that we must ‘seize the mood of the moment’ and transform our April issue into a veritable celebration of the forthcoming royal nuptials.
So this month the AIM imag is ‘a tale of two halves’ as alongside our Royal Wedding inspired features, we also take a closer look at ‘add on’ or additional rooms of the home. From the history of conservatories to the quiet solitude of the humble out door loo, AIM members have provided articles, features and projects, which we hope will inspire you.
Our ‘Royal Wedding’ pages are packed with AIM member’s miniature interpretations and predictions for the big day. So much so that I think it is fair to say that it seems deep down everyone loves a ‘love story’ and everyone loves a good wedding! Combine that wedding with the ‘fairytale’ element and it leaves the hopeless romantics amongst us collectively reaching for the union jack bunting.


The same place I was in 1981: twelve inches from the television screen, armed with a full box of tissues, quietly surrounded by copious amounts of union jack bunting.
At any age, I do love a good wedding!

All Comments
Missed an issue? Don't worry!
Visit the AIM Magazine Archive to view back issues!