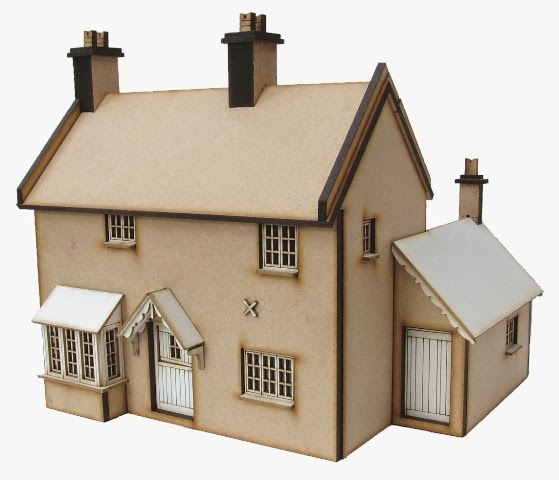 Hello everyone!
For a while now we have realised that here in PP HQ we are fast running out of storage space, to the point where we are positively bulging at the seams!
So... we have decided it is finally time to have a (much needed) BIG clear out.


As a result over the next few weeks we will be auctioning off most of our unwanted back catalogue of ex display items on EBAY!

All the houses that have been earmarked for ebay are the constructed / undecorated ones that were both featured in our instructions and also displayed on the PP stand.
Currently we have listed the following PP Ex display items on Ebay;

All of our ex display models were made by myself and have been signed on the under side.
Our Ebay seller ID is petite-properties
All of our auctions will start at only 99p and have no reserves.
We will also post worldwide.
These listings are only the tip of the iceberg and we plan to list many more!
So why not grab yourself a bargain???? 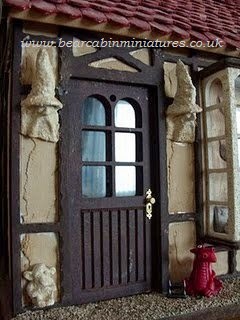 AIM members Julia and Hywel of Bear Cabin Miniatures specialise in fantasy, myth and magical miniatures. Sadly, due to an unforeseen event they have recently closed their Artisan Dolls House Shop in Swansea, but they will continue to exhibit at  Dolls House Fairs around the UK and can be found at: 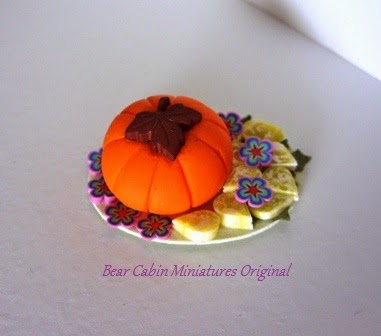 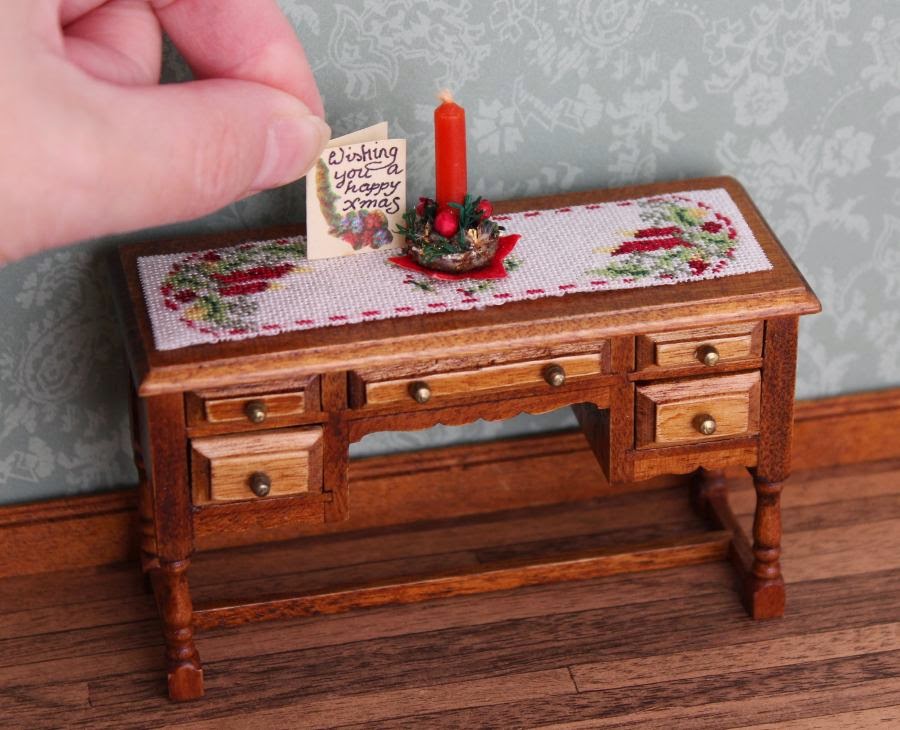 If you love Christmas and you love embroidery too, then it's never too early to start on your Christmas stitching projects. As the nights start drawing in, what can be better than having a Christmassy project to keep you busy in the evenings? 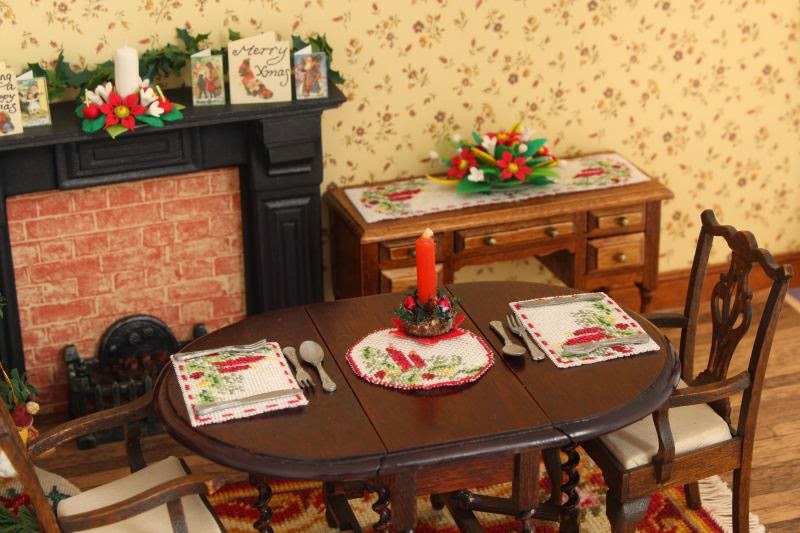 AIM member Janet Granger has recently added some new miniature needlepoint kits with Christmas motifs of candles and holly for table runners and place mats to her 12th scale embroidery kit range. There is still plenty of time before the festive season to make them for your festive doll house displays or to stitch as wonderful Christmas presents for friends who have doll's houses too.

All the kits contain 32 count silk gauze, plenty of Anchor stranded cotton and a suitable needle for you to stitch with. The designs are counted from a colour block chart (the design isn't printed on the fabric), which is simple to use and easy on the eyes. Instructions on how to finish the kits are included, too. You may want to purchase some Fray Check fabric glue (also available on the website) to stabilise the edges of the gauze before you trim around it.
The long table runner kit measures 3 5/8 x one inch and costs £12.95, the round table centre mat measures 1 3/8 inches diameter and costs £8.95, and each of the set of four place mats measures 1 3/8 by an inch and costs £14.95. All of them are available now from:

You can also find tutorials on the website showing exactly how these kits are to be made up:
http://www.janetgranger.co.uk/tutorials.htm

and detailed images showing what each type of kit contains here:
http://www.janetgranger.co.uk/kits.htm 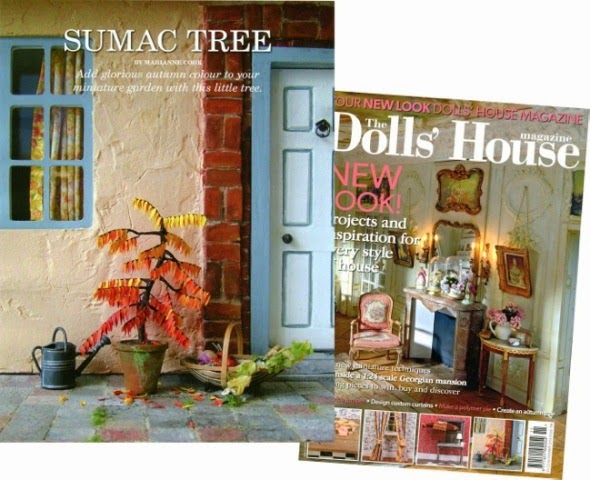 The November 2014 Issue of The Dolls' House Magazine features not one but five AIM artisans. Marianne Cook, Janet Granger, Diane Gregory, Frances Powell and Sally Watson all feature in the glossy pages of the latest edition (Issue 198) I'm sure all of our readers will join me in saying a proud
"Well done to you all".

One of those members, Marianne Cooke is a painter who makes miniature plants and flowers mostly in 1/12th scale. Her aim is to make them look as if they were growing in, or had just been gathered from her own garden, which means they are definitely not florist-perfect! Marianne may add a little crack or moss to the pots, and sometimes they even have a weed growing alongside them. Some flowers may be overblown or still in bud and a leaf or three may be blemished which  adds to their uniqueness and delight. 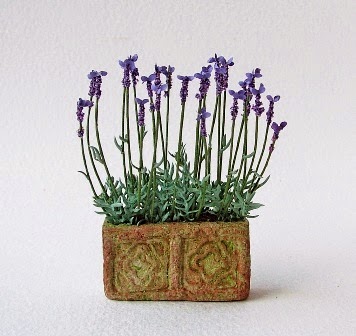 Marianne's contribution to The Dolls House Magazine is a project to make a Sumac tree in 1/12th scale (with brief additional instructions detailing how to adapt it for 1/24th). This colourful addition would be perfect for your autumn miniature garden or in a pot beside the front door. Marianne tells us that it is the first of a number of projects to be included in future issues of the magazine. If you love plants and flowers but are not so keen on hand making them yourself, why not visit Marianne's website or her Etsy shop for many delightful flowers and plants all ready to be placed in your miniature garden.

You can buy the Dolls' House magazine from: www.thegmcgroup.com

Posted by Artisans in Miniature at 14:37 No comments:
Email ThisBlogThis!Share to TwitterShare to FacebookShare to Pinterest
Labels: AIM Members News 2014, Plants and flowers 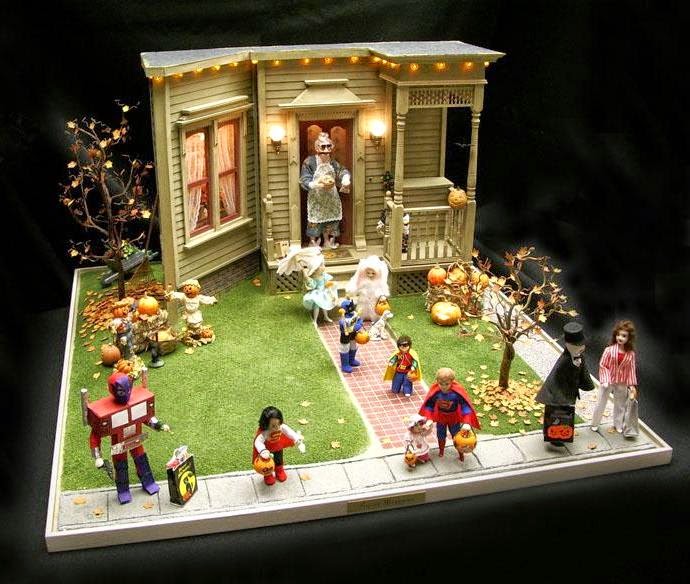 "Sweet Memories depicts a Halloween scene with many children visiting a neighbourhood house. Each child is wearing a costume that is a replica of the costumes worn by my son and daughter over a decade ago for trick and treating. Joining in the fun the old lady giving out the treats is also wearing a mask and so is her cat besides her. The doorbell at the door actually chimes when pressed. It is also harvest time, the rake leans against the wall ready to rake up the fallen leaves, the wheelbarrow is full of vegetables plucked from the pumpkin patch .  and the wood pile is being made ready for the winter to come. 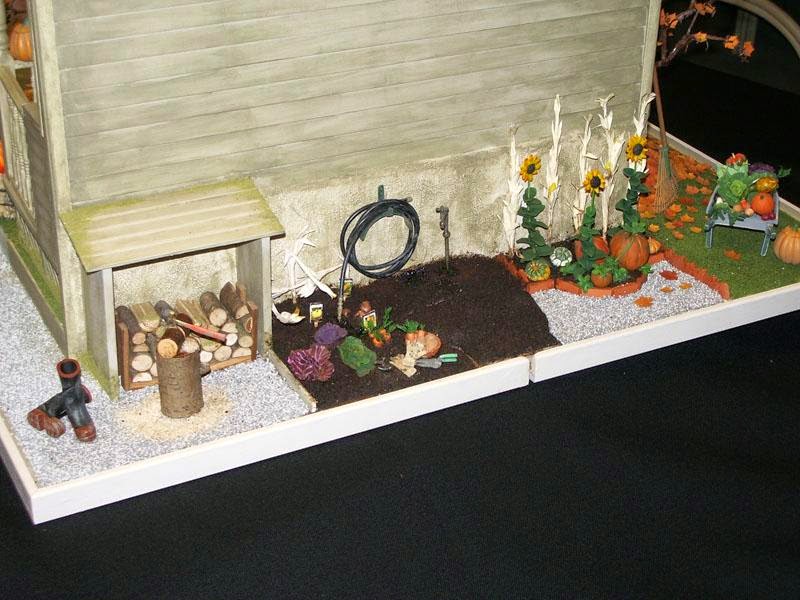 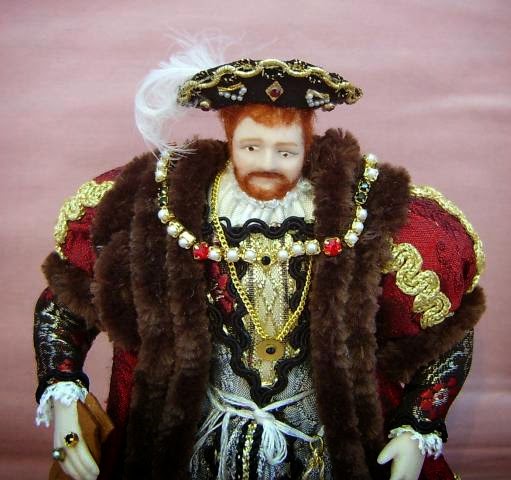 A superbly detailed one twelfth scale miniature porcelain doll standing approx. six inches tall, Henry wears a lavishly decorated silk doublet with braid trimmed silk skirts and matching codpiece. Gold decorated ribbon garters hold up his ivory silk hoes and on his feet are typical square-toed leather shoes. Henry’s fine coat has a large ‘fur’ collar and on his head is a feathered and bejewelled black silk hat. Henry holds leather gloves in one hand and has a tiny leather-sheathed dagger hanging around his waist.

All Comments
Missed an issue? Don't worry!
Visit the AIM Magazine Archive to view back issues!